Until recently, I had only owned two different pairs of glasses in my life, and I didn’t particularly like either of them. Contacts were my preferred method of being able to see, and my glasses existed pretty much to get me from the bathroom to the bedroom at night without running into anything.

However, as my glasses were two or three prescriptions behind and my contacts don’t agree well with Washington allergens, I decided it was finally time to get some glasses I didn’t mind wearing in public. And thus came . . . the brainy specs! 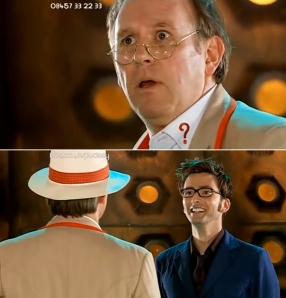 “You don’t even need them. You just think they make you look a bit clever.”

Unlike the dear Doctor, I do need my brainy specs, but I’m not against them making me look a bit clever. Or, you know, a bit more authory.

All right, enough goofing off. Time to get back to work. My writing is certain to be fabulously inspirational under the influence of such literary spectacles as those I wear.

"Creation brings deep satisfaction and fulfillment. We develop ourselves and others when we take unorganized matter into our hands and mold it into something of beauty."